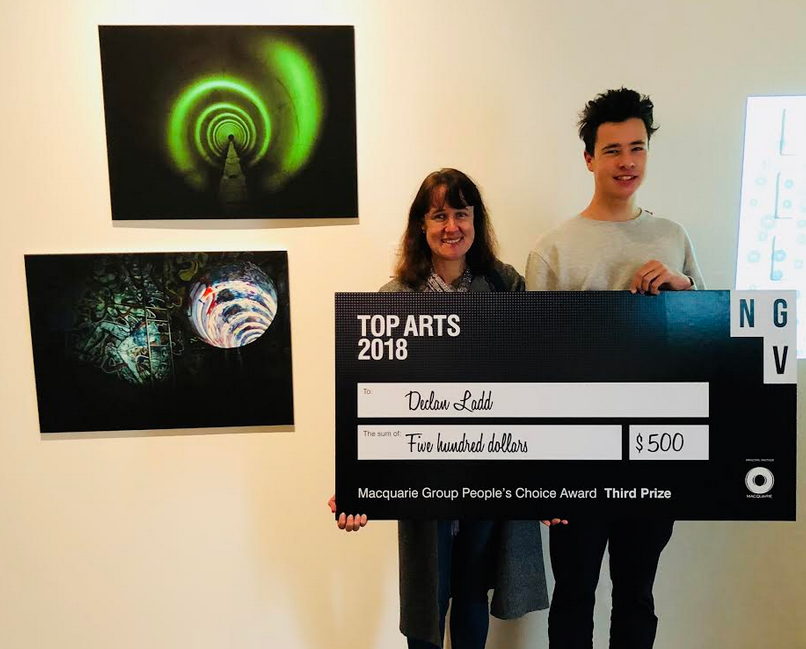 On 28 June I had the great pleasure of attending the 2018 Top Arts People’s Choice Awards at the NGV where Declan Ladd, one of our VCE graduates from last year, received Third Prize for his compelling photographic image Sucked In from the Drain Dreams series, 2017.

That these awards are the result of the unsolicited votes of the many thousands of visitors to the Top Arts exhibition makes them both especially prestigious and very gratifying, so it was wonderful to be there to share the moment with Declan and his mother, Kylie. The fact that Declan had no inkling that he was in the running to receive an award made it doubly satisfying.

Declan came to Preshil for Year 11 from a school where there was considerable emphasis on academic performance and the achievement of a high ATAR. At Preshil, Declan enjoyed the freedom to take risks with his art and to try out techniques and effects without being constrained to the tried and tested ideas of others. It was very satisfying to see his imagination and courage rewarded in this way and to know that his move to Preshil proved such a positive step to high achievement in the area of his passion and his future career path.

Declan was leaving with camera in hand for the Kimberley and I am looking forward to having him return to Preshil to encourage other students in the pursuits that inspire them.

Please click here to learn more about The Arts at Preshil.